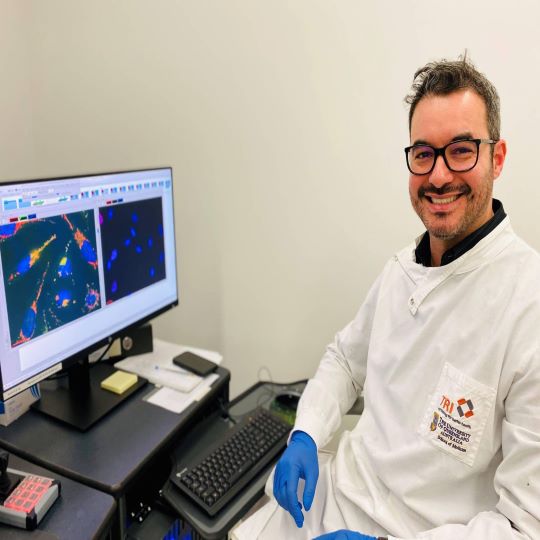 Fernando Guimaraes is the 2021 ANZSA research grant recipient and a group leader at The University of Queensland Diamantina Institute. Australia and New Zealand Sarcoma Association spoke with Dr Guimaraes to discover how his research into harnessing our own immune system to fight sarcoma is progressing.

“The ANZSA research grant has allowed me to partner with the oncologists from the Queensland Children’s Hospital in Queensland as well as facilitate my own lab at The University of Queensland Diamantina Institute to help find new ways to treat sarcoma,” says Dr Guimaraes.

Sarcoma is a very challenging cancer to treat and if it reoccurs or metastasises it is even more challenging. Dr Guimaraes believes there is potential to empower Natural Killer (NK) cells which are part our immune system to attack the sarcoma cells.

“NK cells are a type of white blood cell that play a critical role in controlling cancer, but they only make up around five per cent of our white blood cells. They mark unusual cells so they stand out, triggering an immune response that can recognise and kill altered cells such as cancerous cells. However sometimes while the NK cells are busy, cancer cells can hide from them and proliferate before they can be killed, often forming advanced tumour micro-environment that prevent NK cell action.”

Dr Guimaraes is looking into a way of preventing the cancer cells from pressing the stop button on the NK cells. He believes this might be achieved using Killer Immuno-cell Receptors (KIR) that are responsible for preventing NK cells from killing cancer. Cancer cells can be attacked and killed when you create a mismatch between the KIR and the human leucocyte antigen (HLA). If this occurs, the NK cell is stimulated to attack the target, resulting in the killing of the cancer cell.

So far, the grant provided by ANZSA has enabled Dr Guimaraes to demonstrate that his theory works in vitro. Now he will create an in vivo model where the tumour is grown in a mouse model mimicking the human cancer environment and then therapeutic treated with human NK cells continuing to further his research in sarcoma prevention.