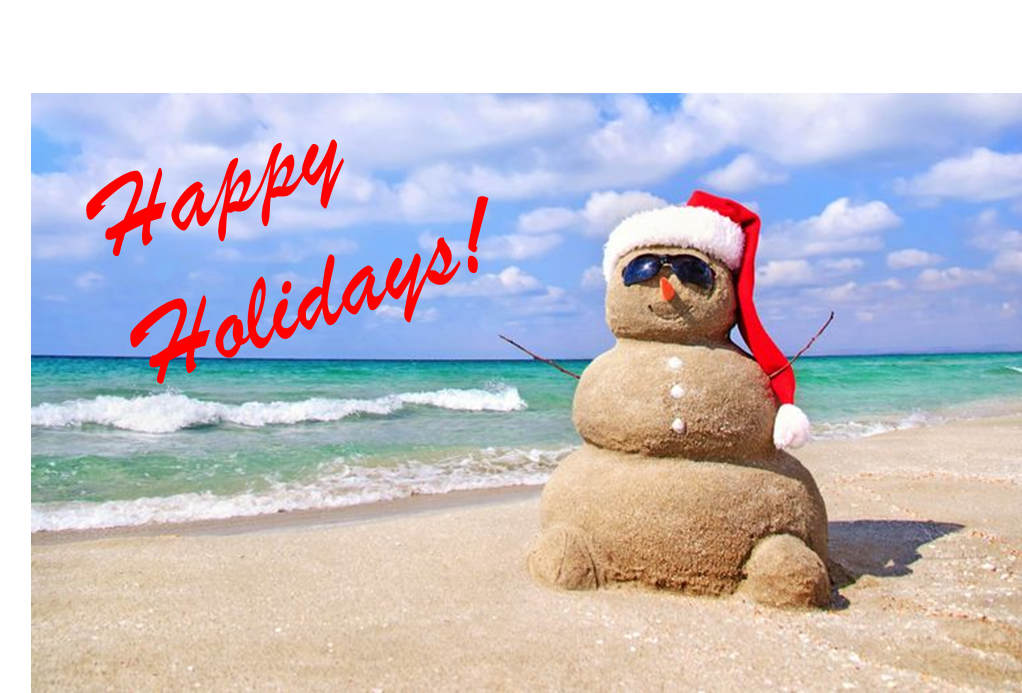 The ASSG, as a cooperative clinical trials group, has a broad remit to the sarcoma community in Australasia. We are very proud to be able to support a wide range of research activities that will have direct impacts for patients with sarcoma and their families.

In 1998, the Australian Sarcoma Group was established by orthopaedic surgeons as a subspecialty multidisciplinary group under the Australian Orthopaedic Association. The ASG’s aims were to ensure that sarcoma clinicians were well trained and educated to treat this complex disease. The ASSG was established in 2008 when ASG clinician researchers identified the need for a sarcoma research organization, given an increasing body of research being conducted in Australia, as well as a growing interest in international and investigator-driven clinical trials. The Australasian Sarcoma Study Group (ASSG) evolved as an independent group focused on studying the nature and treatment of bone and soft tissue sarcoma. Since then, the sister groups ASG and ASSG, have met together at a combined annual scientific meeting. 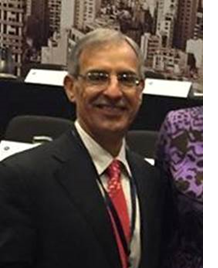 It is with a great sense of accomplishment that I review the progress of ASSG stewarded by your Board over the past 12 months. Prior to doing so, I would like to express my sincere gratitude and humble thanks for the generous and selfless contribution from our directors, members of the scientific advisory committee (SAC), our staff and in particular our Executive Officer Denise Caruso. We have just passed the first anniversary of the 2016-2021 strategic plan with activity well underway in each of the four core strategies.

It is always helpful to remind ourselves of ASSG vision which is “to advocate for and to improve patient outcomes for sarcoma and related tumors through the delivery of high quality and globally recognized Australian and international basic, translational, clinical and supportive care research’. We should always test ourselves with progress against this vision. How are we going? Well, my assessment informed by the Board is that progress has been robust and encouraging. A lot has been achieved and whilst we have missed some ambitious deadlines, overall there has been good solid progress.

The most significant development over the past 12 months has been the purposeful and constructive engagement with Australian Sarcoma Group (ASG) and the agreement to merge both organizations to create a stronger and unified Australian and New Zealand sarcoma body. The agreed objective is to efficiently harness our collective resources to deliver better patient care to the sarcoma community. As discussed and agreed at the members meeting in October 2017, a sensible consultative and planned approach has been agreed with the aim of finalizing formal arrangements by the October 2018 annual meeting.

Over the past year solid progress has been made in each of the four core ASSG strategies; developing and delivering quality research; increasing awareness and recognition; funding and governance.

The highlights over the past 12 months include:

Thanks again to everyone involved in contributing to improving patient outcomes for the sarcoma community. I would like to take this opportunity to wish everyone a safe and joyous festive season.

Approximately 20% of sarcomas arise in the retroperitoneum (the region at the back of the abdominal cavity). In 2013 the Transatlantic Retroperitoneal Sarcoma Working Group (TARPSWG) was established to combine data in an attempt to better understand this group of diseases. The group started as 8 institutions and together developed a nomogram for predicting disease recurrence as well as publishing a number of consensus statements related to patient care in this disease. The group has now expanded to include over 20 institutions in North America, Europe, Asia and Australia (Peter MacCallum Cancer Centre), and have commenced a prospective registry with a mutually agreed combined dataset.

David Gyorki, ASSG Board Director and a surgeon within the sarcoma service at Peter MacCallum Cancer Centre leads the program for retroperitoneal sarcoma surgery and is an active member of TARPSWG. Since January 2017 all patients treated with a new diagnosis of primary retroperitoneal sarcoma at Peter Mac have been enrolled in this registry. To date, seven institutions have commenced data collection to the registry and approximately 250 patients have enrolled internationally (18 at PMCC). It is anticipated that when all institutions have completed ethics, over 600 patients will be recruited to the registry annually.

At Peter Mac, we have established a dedicated fortnightly retroperitoneal sarcoma registry meeting attended by radiology, pathology, clinical and research nursing staff as well as members of the surgical and radiation oncology teams to discuss each patient in detail and ensure the fidelity of the data for entry into the registry. The dataset is extensive collecting detailed information regarding patient demographics, imaging, extent of surgical resection, perioperative data, (neo)adjuvant therapy, histopathology including immunohistochemistry and outcome. The registry is currently stored at each participating centre, and we are grateful to Jasmine Mar from the ASSG for her efforts with data entry and storage.

The TARPSWG group meets twice a year, at the meetings of the Society of Surgical Oncology and Connective Tissue Oncology Society. At the recent meeting of CTOS, the group discussed various aspects of the registry including centralisation of data and the possibility of tissue collection for translational research. There was also discussion about undertaking a randomised controlled trial of neoadjuvant therapy for patients with retroperitoneal sarcoma. 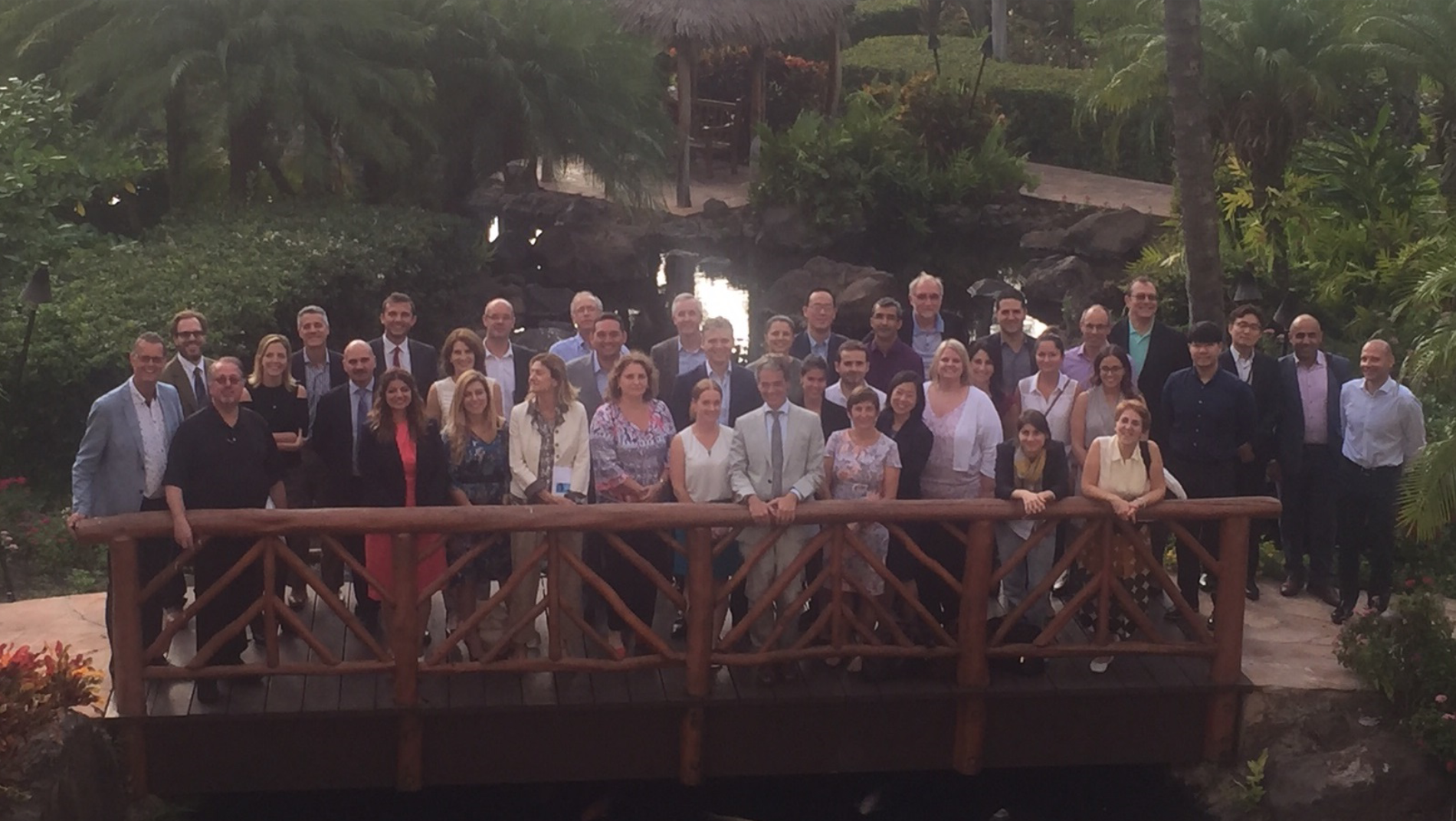 Thank you to our Donors

The ASSG would like to thank all our generous donors. Every dollar helps and allows the ASSG to provide clinical trials and research projects for the sarcoma community and as always 100% of donations go to Sarcoma research.

We would like to especially thank the wonderful philanthropic and fundraising groups for your continued support including Hannah's Chance, Kicking Goals for Xav, the GPA Andrew Ursini Charitable Fund, Rainbows for Kate, Helen Sewell for the Johanna Sewell Sarcoma Research Grant, 70.3 for Stoney and the groups fundraising for the Leon Stone Sarcoma Research Grant, Stop Sarcoma and Kenny's Mates Sarcoma Research Support Initiative. All of us at the ASSG are very grateful for all your efforts. Thank You!!!

2017 Annual Sarcoma Meeting, which the Australian Sarcoma Group and Australasian Sarcoma Study Group jointly convene, was held in Adelaide, Australia October 13th and 14th at the Flinders University. The theme for this year’s meeting was“AYA Sarcomas: Current Scenario and the Way Forward”.

The meeting was a success by any measure with important multidisciplinary presentations with a focus on AYA sarcomas. We were pleased by a record number of delegates and are encouraged to maintain our broad appeal. The 2018 ASM will be in Perth for the first time and we look forward to seeing you there. 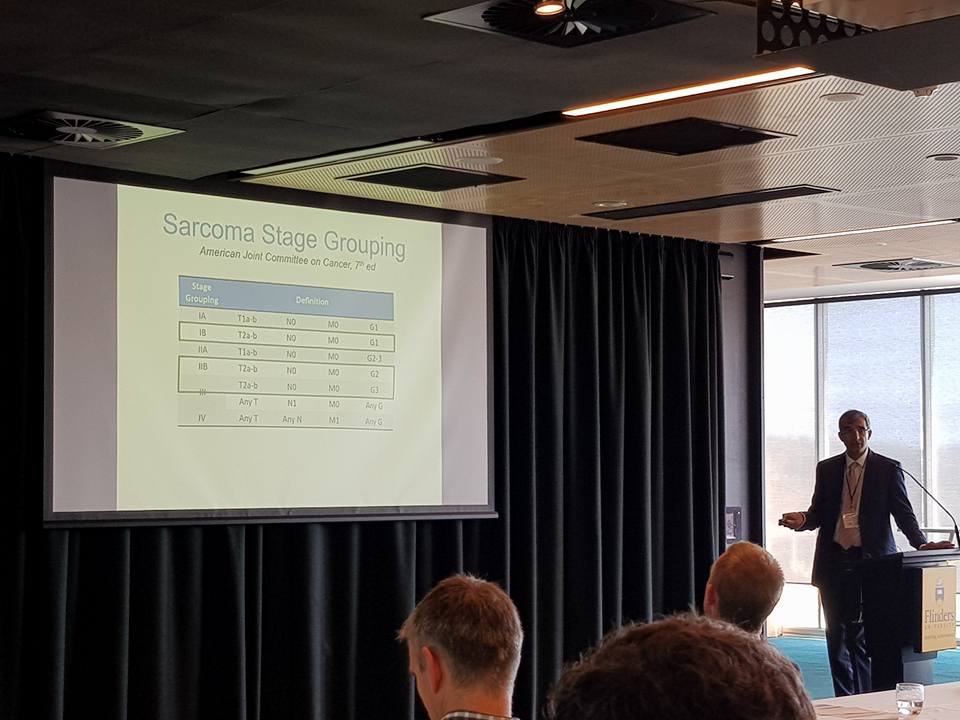 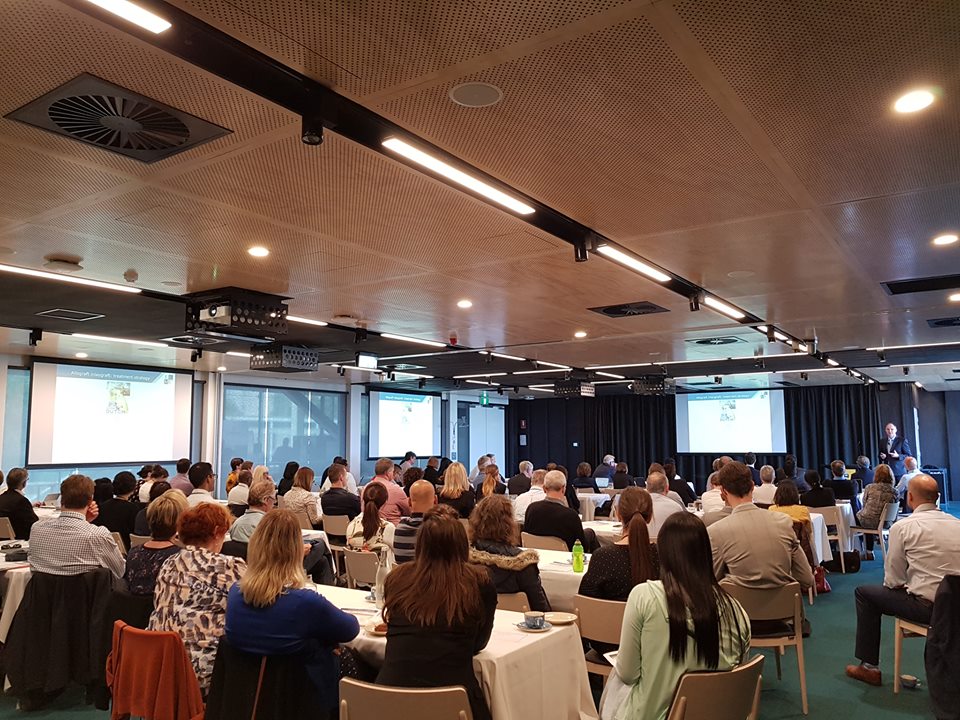 Professor Sander Dijkstra speaking on treatment update for the Ewings and Osteosarcoma patients. 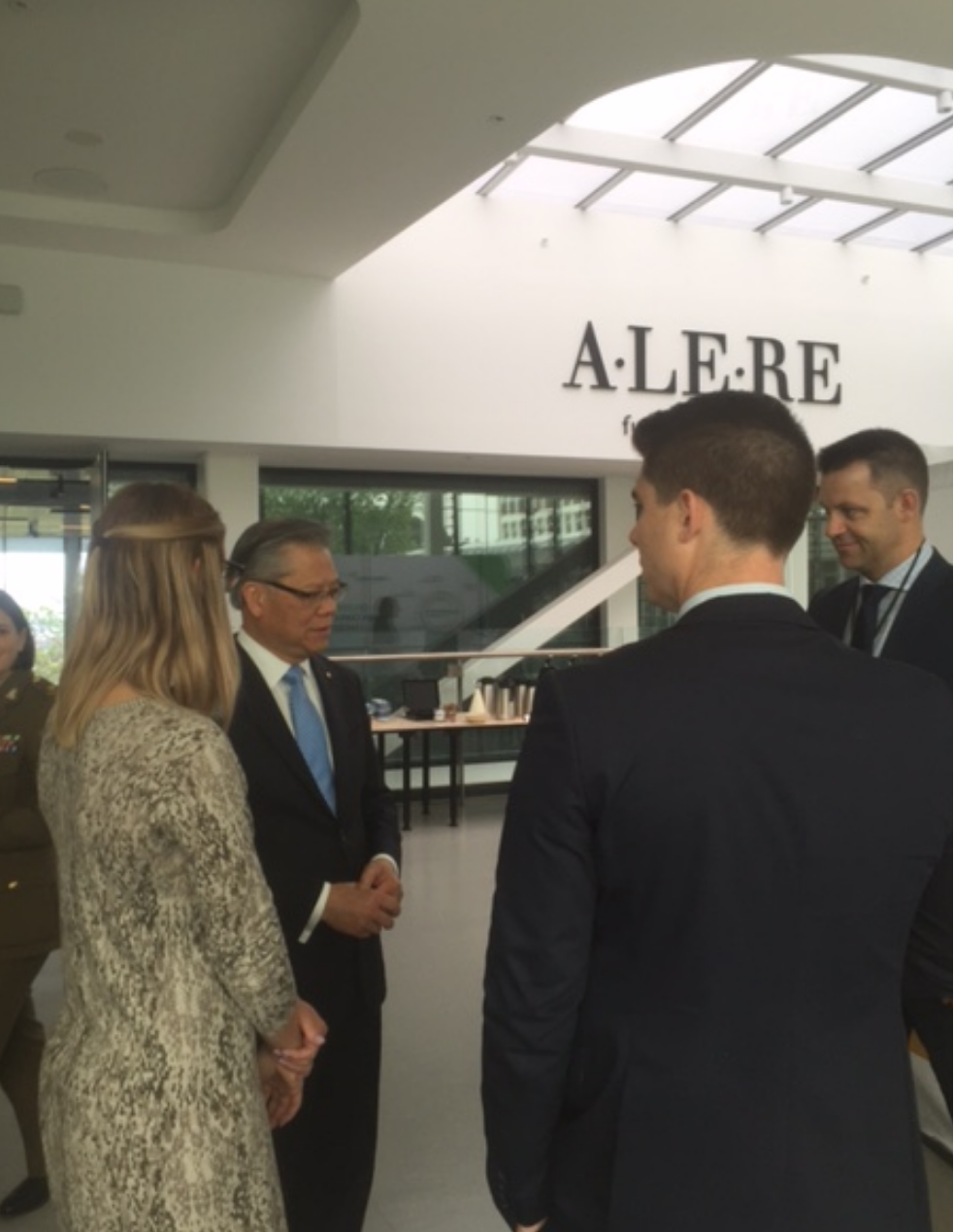 The 2018 Australian Sarcoma Annual Scientific Meeting will be held in Perth on Friday 12th and Saturday 13th of October 2018.

The ASSG is pleased to announce that we will be able to support four new sarcoma research grants for funding in 2018. These grants are directly supported by philanthropic groups that raise funds to support sarcoma research. The ASSG is extremely grateful for their ongoing support. To date the ASSG has been able to award over 1 million dollars in ASSG Sarcoma Research Grants! Thank you to our supporters.
The grants for 2018 are as follows:

- The Johanna Sewell Sarcoma Research Grant of $50,000 for one year

- The Xavier Krikori Sarcoma Research Grant of $20,000 for one year

- Hannah's Chance Sarcoma Research Grant of $30,000 for one year

For more information and application form, please visit our website. Grant applications close 5pm on the 19th of January 2018.

ASSG and ANZCHOG (the Australian and New Zealand Children’s Haematology and Cancer Group) were successful applicants for a National Health and Medical Research grant for a clinical trial utilizing a novel agent for solid tumours with poor outcomes. This study is truly a collaborative endeavour and will recruit three cohorts of patients: Neuroblastoma, Osteosarcoma,and Rhabdoid Tumour using Histone deacetylase inhibitors. The NORTH study, therefore will recruit paediatric, adolescent and young adult patients across Australia and New Zealand. This is a true bench to bedside clinical trial as the preclinical work has been conducted in Australia with partial support from the ASSG Sarcoma Research Granting scheme. The study will run over five years and will open early in 2018.

Donate to Sarcoma Research this Christmas 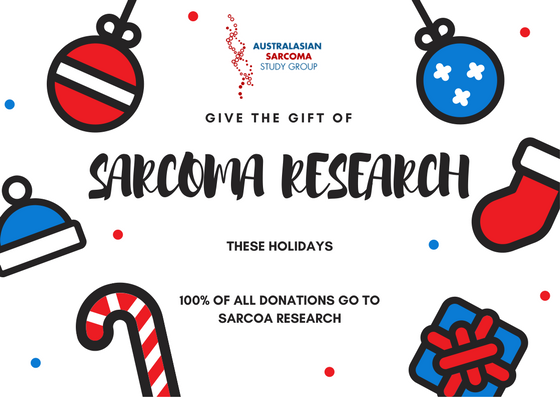 As the end of the year approaches, please consider donating to sarcoma research.

Thank you to our Donors

Donate to sarcoma research this Christmas

SMOC: A study to determine whether whole body MRI is a useful screening tool for high risk patients and their family members. Read more

rEECur: An International Randomised Controlled Trial of Chemotherapy for the Treatment of Recurrent and Primary Refractory Ewing Sarcoma.